Why I flipped
Engineering is all about problem solving.   Even though I’ve always strived for interactive lectures in the past, I still felt that my students were too passive.   I wanted a more active classroom where students would work collaboratively to solve problems.   This is a hard sell for Freshmen, however, a necessary skill for professional engineers.

Technology Tools
Screencast Software
Flipping requires that the “facts” be acquired out of class so that the “applications” can be performed in class. I struggled with how to put my lectures online and still retain my active “questioning” style. Straight videos were unsatisfactory since I couldn’t stop and get the student to perform an example problem of the topic just discussed. My attempt at a solution is to use a software tool called Captivate (an Adobe product). A similar product is Camtasia. Both of these tools allow you to embed interactive questions in the lecture. An example of one of my lectures is shown here.

2016 Improvements
One of the difficulties in making screencasting is the voice over.   This is especially problematic when the script changes.   For all of my course lectures, I recorded my voice reading the slide script.   Any change of script required that I re-record the entire script for that slide.   This is very tedious.   Recently, I went to an ASEE conference where a presenter showed me how to use the Adobe Captivate speech management tool which will convert text to speech.   The speech is actually pretty good considering that it is computer generated.

Blackboard
EE102 is served through Blackboard for no other real reason but that our university uses this learning management system. As with all tools Blackboard has it’s pros and cons. I like the the way Blackboard facilitates (read “forces”) me to maintain a structured class. I can serve all course materials, i.e. Captivate lectures, Excel homework Blackboard homework, Google doc lab data links. I like how I can have the students upload their lab reports and have them graded online. I really don’t like how Blackboard performs assessments and neither do my students. It is clunky at best. I had hoped to use this feature for online homework, but failed miserably.

2015 – Blackboard Update
In Spring 2015 I successfully moved to using Blackboard tests for online homework!   This transition occurred through a brain shift.   In the past I used one test for one homework set, i.e. all the homework questions were contained in one test.   The difficulty with this approach is that if the students miss one question in the homework and want to re-try they would have to do the entire test (all homework questions) again.   This was tedious in the extreme.   It was suggested to me by another faculty that if I put only one homework question in a test and then had several tests that students would be able to retake each test independent of the others and so only retake those questions that they originally failed at.   Hit hand against head!   This solution was so obvious that it required someone else to point it out to me!

Excel Programmed Homework – RETIRED 2015
I still believe in immediate feedback for freshmen, but have transistioned in 2015 to using Blackboard tests for questions.   See Blackboard section. 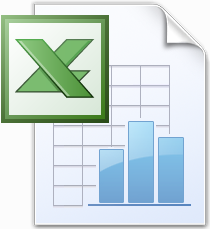 It is important for freshmen to have immediate feedback on whether or not they are understanding a concept and performing a calculation correctly.   Flipping allows me to be present when students are confused or stumble on problems.   Additionally, the programmed excel homework allows the student to know when they are performing the calculation correctly and therefore prompt them to seek help.   Shown here is an example homework.

Google Docs
Collaboration and teamwork are important skills for new engineers to learn. The labs in EE102 are structured so that the lab data acquired from all students are compiled through a google docs spreadsheet. Students then write their lab report using the compiled data set. This leads to a richer data set from which the students can discuss measurement precision and measurement error. Additionally, since data is uploaded real-time, students can assess whether or not their measured data is approximately the same as the rest of the data. When their data is vastly different than the class data, they are prompted to discover why. This triggers a level of troubleshooting which has previously been non-existent.

Assessment
I use a number of assessment tools for this class: 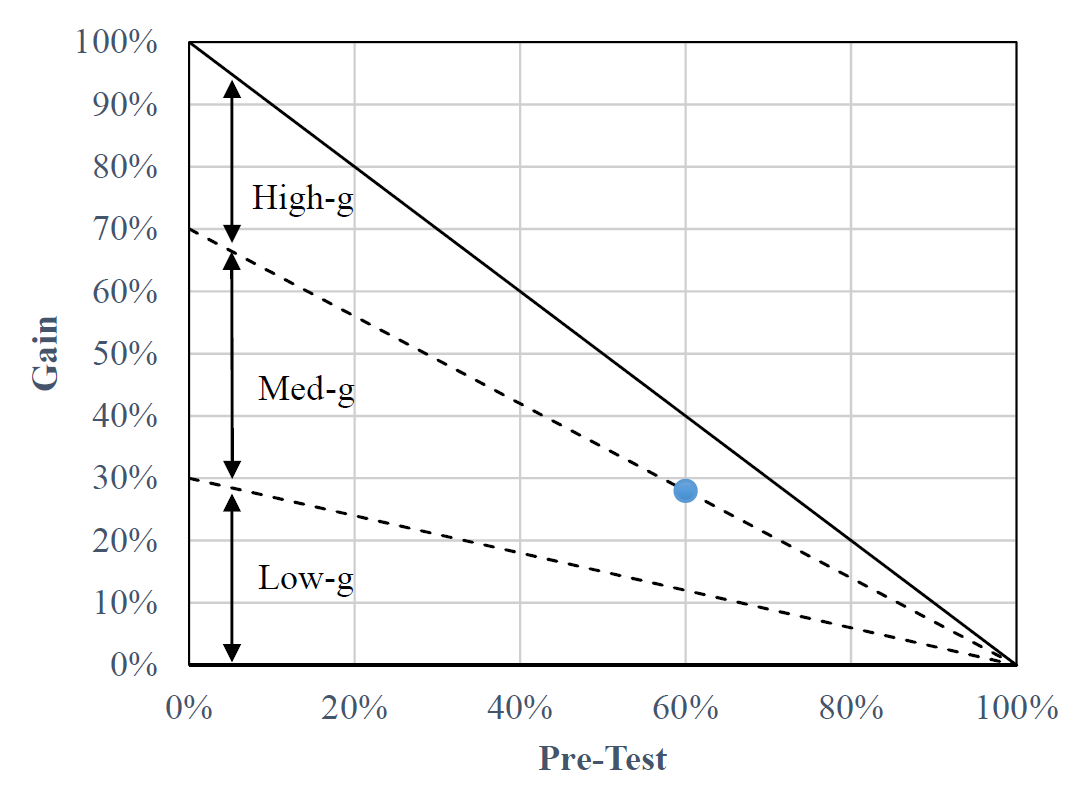 In 2007 I administered a circuit concept inventory test to 15 students as a pre/post-test. The blue marker in the figure above shows the average learning gain achieved by those students. This figure was created in the manner of Hake (1998).   Lines indicate maximum possible gain (solid line) and transitions (dashed lines) between low gain, medium gain, and high gain as defined by Hake. I am again administering the pre/post concept inventory test to the 37 students that I have this semester. Watch for an update of this figure to reflect the learning gains for this flipped course. 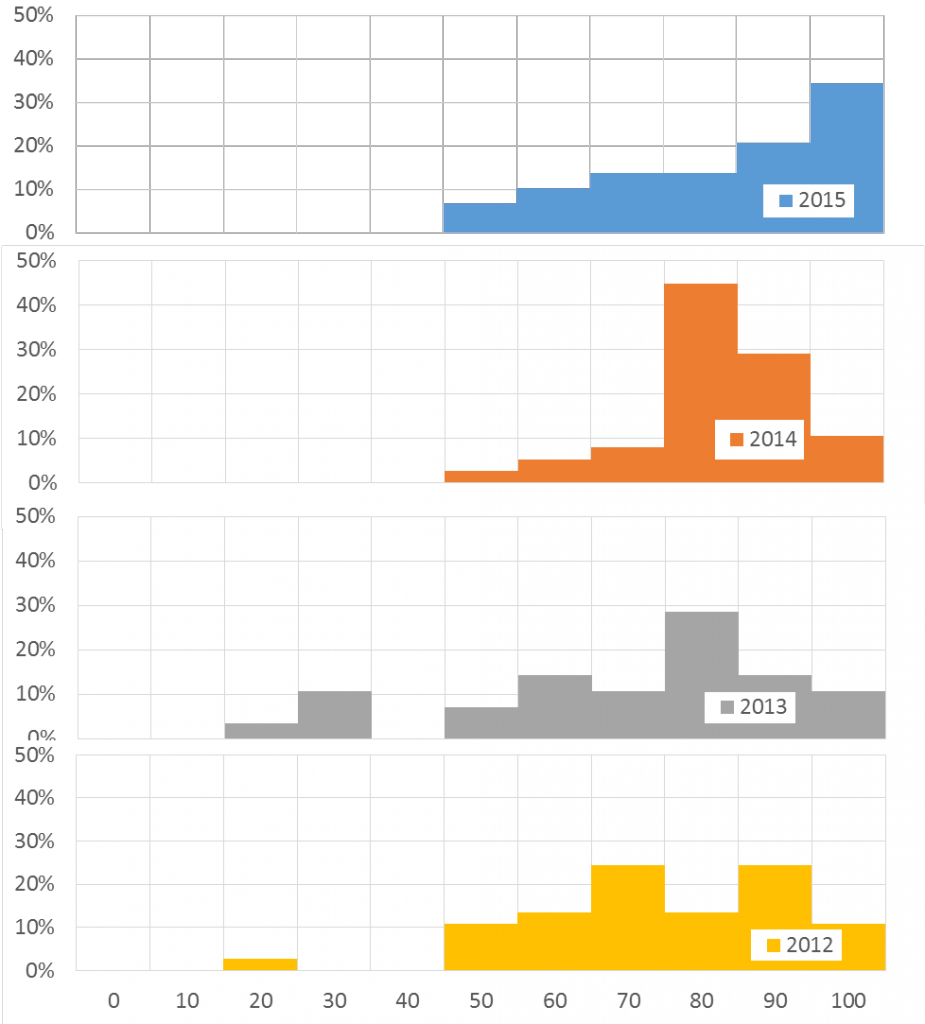 In the pre-flipped years (2012-2013) you see a double peak distribution. I’ve found that this is typical in my freshman class. The students have a wide range of skills coming into the class as represented by their standing in their math sequence. The co-requisite for the class is Calc1, however, there are students who range from Calc1 through having already passed DiffEQ. I suspect that the students that I’m teaching are those in the lower score peak. The higher score peak students are those who would “get it” no matter what I did. The previous two years are also characterized by a broad distribution of scores, with some so low I suspect those students were not engaged at all.

In contrast, the 2014 distribution shows a single primary peak with half the standard deviation of the previous two years.   The improvement is even more dramatic in 2015 where 34% of the class scored above 90 in the exam.   This is compared to only 11% of the class scoring above 90 in each of the past three years.

What appears to have happened is that the students who have struggled in the past have acquired whatever support they needed through this flipped paradigm and have dramatically improved their understanding (as measured by the exam). 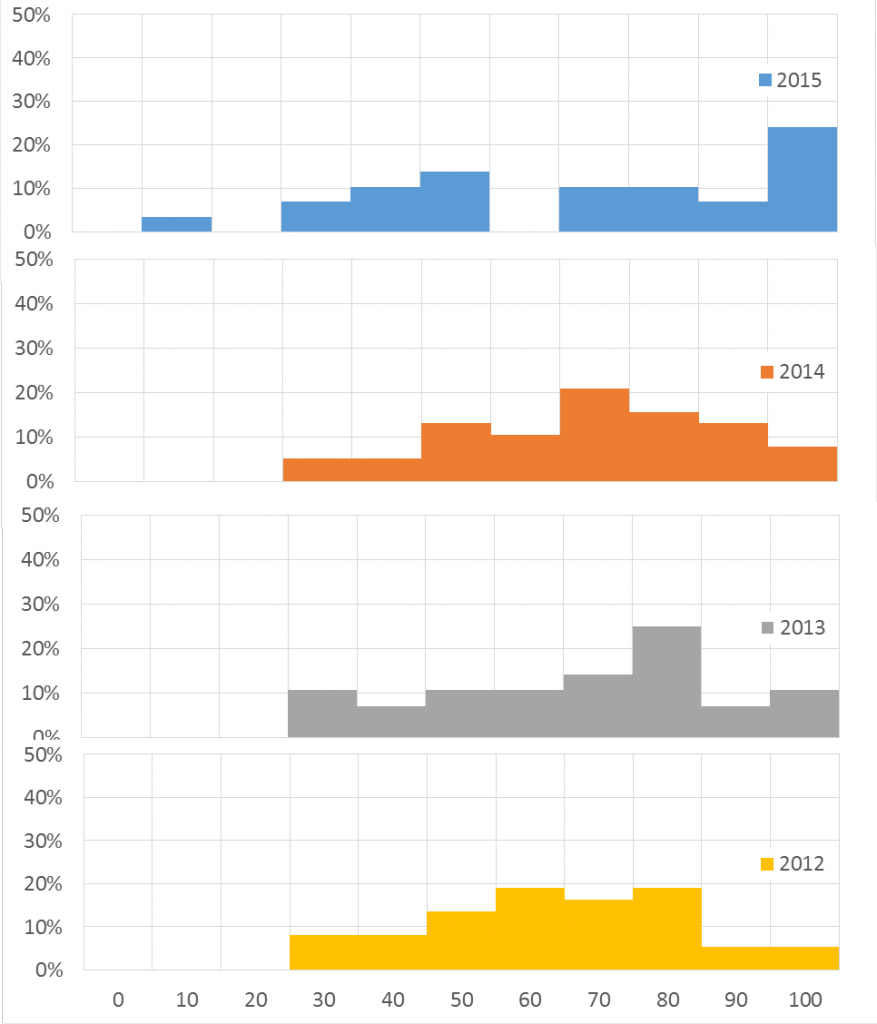 Exam 2 is the hardest of the exams given in EE102.   In Exam 1 the students can still rely to some extent on prior knowledge.   Exam 2 represents, for most students, entirely new material.   The exam scores show a broad distribution, standard deviation approximately 20 for all years.   I was disappointed in the results from 2014, although at the time I could tell that my execution of the in-class portion of the class was not going well.   Students had stopped coming to class. Why come to class if everything is done online?   In 2014, the students didn’t perceive the value in working problems in class.   When they came to class they had not previewed the material and were therefore not prepared for the in class work.   This was very frustrating for me and I think also for the students.

In 2015, I instituted two changes (i) points were given if they came to class and participated; (ii) students were required to submit a pre-class assignment that needed to be completed prior to coming to the first class of the module.   The net result was that more students attended class and they were better prepared.   The result from Exam 2 shows that success.   As with the first exam in 2015 more students scored above 90 (28%) than in the previous three years (~10%).

* In 2015 there was one student who did minimal homework (15%) and had limited participation in class.   That student choose to take Exam 2 but was significantly less prepared that other students in this class.   The 2015* column shows the statistics for Exam 2 if this student’s score was removed. 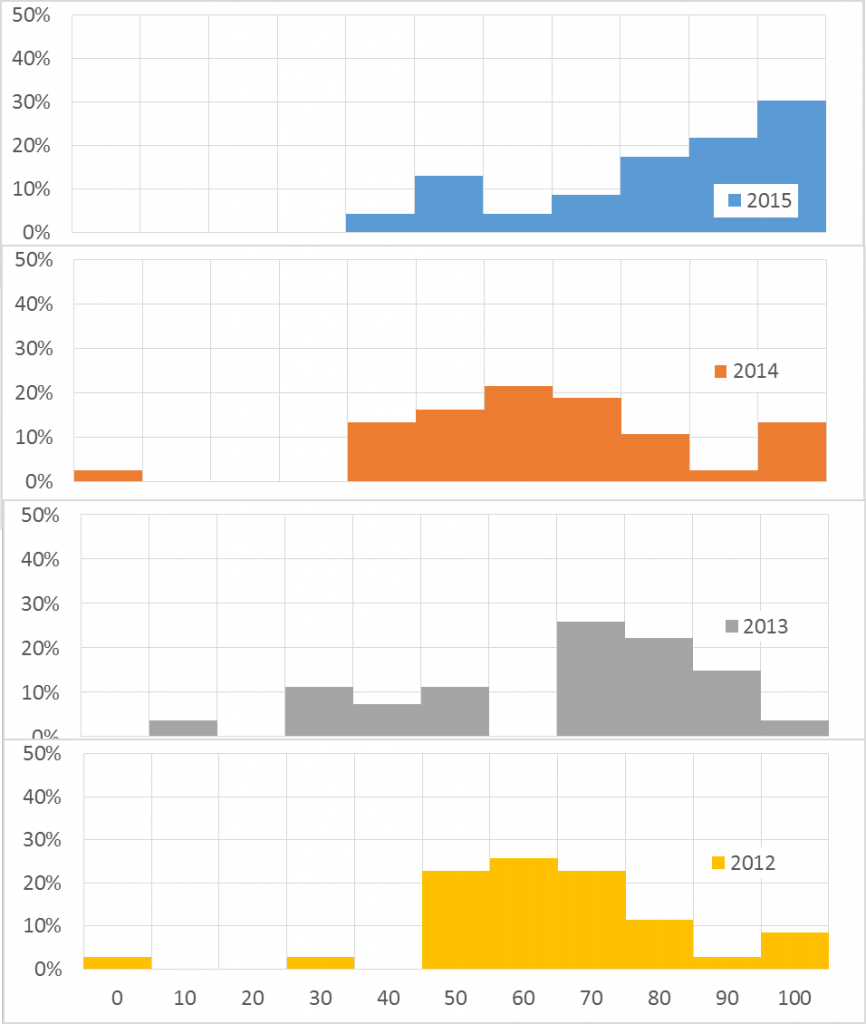 The Final Exam shows the same trend as the previous two exams.   Specifically the percentage of students scoring higher than a 90 (30%) has significantly increased compared to the previous three years!

What I’ve Learned (updated 2015)
Really this section should be “What I am Learning!”.   Spring 2014 is the first semester where I’ve tried the flipped paradigm.   It has been a challenge, full of frustrations and some successes.   Based on the experience of 2014 I made several changes to the way the class is conducted.   Specifically:

Frustrations and what to do about them: